14 Things that you Should Know about Charminar In Hyderabad

14 Things that you Should Know about Charminar In Hyderabad Shahid Ali khan 5 of 5
Pride of Hyderabad Charminar is a biggest attraction of the city. It was constructed in 1591...


Pride of Hyderabad Charminar is a biggest attraction of the city. It was constructed in 1591 by Mohammed Quli Qutab Shah. He developed the Charminar for the stop of plague in Hyderabad town. Since the construction from the Charminar, the Hyderabad town has virtually become landmark of historical site. The Charminar is a very big as well as remarkable construction with four minarets. In the evening, with the lights, the great Charminar looks even more attractive. With the passage of time has become the center of Charminar all this bustling activity that occupied its importance. It is at the bustling bazaars across the Charminar you find the standard nahari stalls as well as kulchas regarding Hyderabad. Hyderabad is one of those few urban centers, which have a fine blend of modernity as well as tradition.


Raniji ki Baori, also known as “Queen's stepwell" is located in Bundi town in Rajasthan. It was constructed in 1699 by Rani Nathavati Ji younger queen of ruling Rao Raja Anirudh Singh of Bundi. 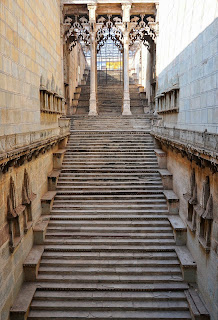