Home Fort Kangra Fort is a Unique Example of Architecture
Facebook
Twitter
Google+
Pinterest
WhatsApp
Kangra fort comes in one of biggest forts in India situated in Kangra city of Himachal Pradesh. It’s ranked on eight places in the list of largest fort in India. It is built on the slope of a steep hill fort from its manufacturing art has attracted visitors. Situated on the confluence of the rivers Ban Ganga and Majhi (Patal Ganga), on the sharp hill fort is considered the oldest fort in the country. According to historical history the written details of this fort found in 1009. But according to beliefs the fort considered at the time of Mahabharata. According to a fact, the Kangra fort was built in 1500 AD by Susharma Chandra who is the 234th king from royal family. If said about Fusharma, in Mahabharata war he was fight from the side of Kaurvon.
History of Kangra Fort
It’s said that due to ear shape of Bhul–Bhulaiya in Fort the fort was called Kangra Fort, from that time it’s called kangra fort. At the time of Hindu kingdom the fort was famous for its architecture and money in Iran, Afghanistan and in other western countries. Ruler of Ghazni Mahmud was came kangra valley for rob money. He was decimate the fort, kangra city and Nagarkoti Temple and robbed gold, silver, pearls and diamond  in very large amount. Mahmud Ghazni appointed his army in the fort. Tomar rulers of Delhi in 1043 by removing control of the fort again transferred to the local Hindu rulers Katoch. In 1337 Muhammad Tughlaq and in 1351 Feroz Shah Tughlaq established temporary occupation. After sitting Akbar on the throne of Delhi in 1556, fort comes to king Dharmchand. After his death in 1563, his son Manakiya Chand became the ruler. Akbar’s general Khanjhan attacked on the fort in 1571. But Akbar could not ever permanent possession onthe fort. Mughal emperor Jahangir in 1620 with the help of their governors could conquer the fort. In his statements, he said “the victory on the fort is very important and great”. More than 12,000 men had died in the war fighting heroically in katoch. Jhnagir came in January 1622 after winning the Kangra fort. He was liked the atmosphere and weathered. He was built Jhnagiri door on his name and a mosque in the fort. That is still available in the fort. The fort was occupied by the Mughal army for long time. It failed to take away all the effort. In 1789 Sikh Sardar Jai singh Khanhaiya took fort from Mughal Army. After he was allocate fort to Katoch King Sansar chand in (1765-1823) instead of ground area. Thus, after centuries of sacrifice Hindu Kangra king again returned to the fort. Amar Singh Thapa of Nepal led by the Gorkha army siege of the fortress of nearly four years. In 1809, according to the Treaty on the assurance of support against Gorkhas Fort Maharaja Ranjit Singh was handed over. Sikhs are placed on the fort until 1846. Thereafter, the fort fell to the British. But a few days before the terrible earthquake of April 4, 1905 the British army had left it.
Architecture of Kangra Fort 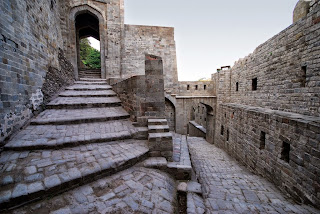 The most destructive earthquake in Kangra history heavily damaged the fort. Because of it many valuable works of art, buildings were damaged. But still, the fort boasts of their many stories of Hindu history. Even today coming to look shocked from its wonderful proof of ancient Indian architecture. Currently Archaeological Survey of India has been taking care of the fort. The first enter the fort to go through Maharaja Ranjit Singh door. Further Ahini door and richness door via a narrow path leads to the top of the fort. It has a narrow way next door to the Ahini door and Amiri Door comes up above.  The arches on the porch in the middle, Ganesh, Hanuman statue of Mahishasura Mardini and statues established. Further Jahangir door then come the Anderi door.

Why You Should Experience Gwalior Fort At Least Once In Your...